Sulfur is keratolytic (unclog skin pores), antifungal, and antibacterial activity. Accumulation of dry keratin of the skin surface and the skin pores' openings is the primary cause for blackheads, whiteheads, and future acne breakouts. When applied to the skin, sulfur interacts with cysteine to form hydrogen sulfide that can dissolve excessive keratin accumulating in skin oil glands and on the skin's surface. Sulfur was also found to inhibit the overgrowth of P. acnes and some Streptococci and Staphylococcus aureus. 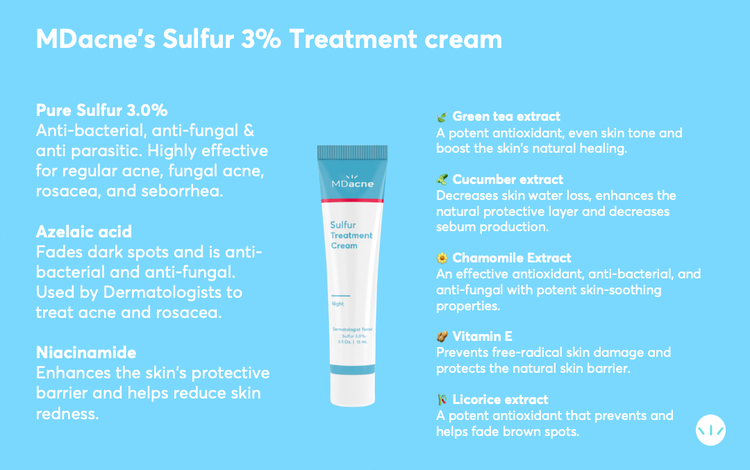 How does sulfur work in Rosacea?

Sulfur has an inhibitory effect on Demodex mites, which explains its effect on rosacea. One study compared a 10% sulfur cream to taking oral antibiotics (tetracycline). This study showed that sulfur cream induced a more significant reduction in rosacea's inflammatory components than oral antibiotic treatment. The relapse rate within six months was similar for both treatments.

How does sulfur work in Seborrheic Dermatitis?

Trials evaluating the effectiveness of sulfur in seborrheic dermatitis and dandruff and pityriasis Versicolor were very effective. Adverse events were minimal and included a mild burning sensation and dry skin.