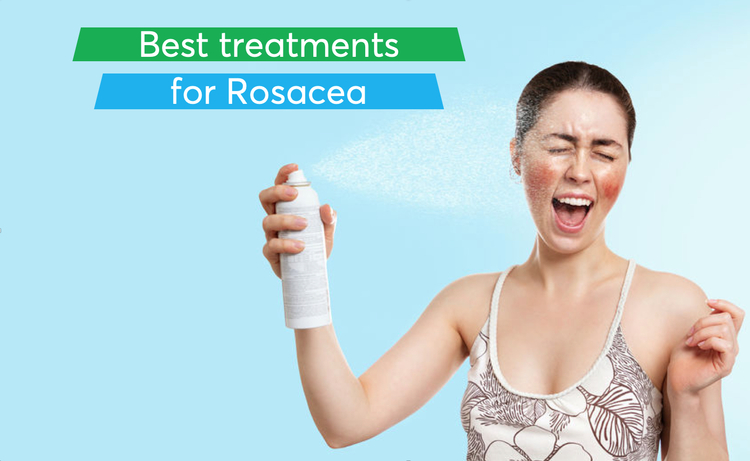 Rosacea, also called acne rosacea, is one of the most common skin conditions in fair-skinned people after 30. It is estimated that 16 million people in the US alone have rosacea. Bill Clinton and Diana, Princess of Wales, are 2 of the many famous people that suffered from rosacea.

What is the cause of Rosacea?

The leading cause of rosacea is your familial, genetic tendency. It is also believed that a tiny mite, Demodex folliculorum that normally lives in our skin, has a role in the development of Rosacea. It was found that people with rosacea have a 15 to 18 times higher number of these mites than people without rosacea, and it is believed that many of these mites could irritate the skin and possibly trigger Rosacea. The other common rosacea triggers are stress, hot or cold weather, alcohol, hot baths or sauna, spicy food, and hot drinks.

What are the signs of Rosacea? 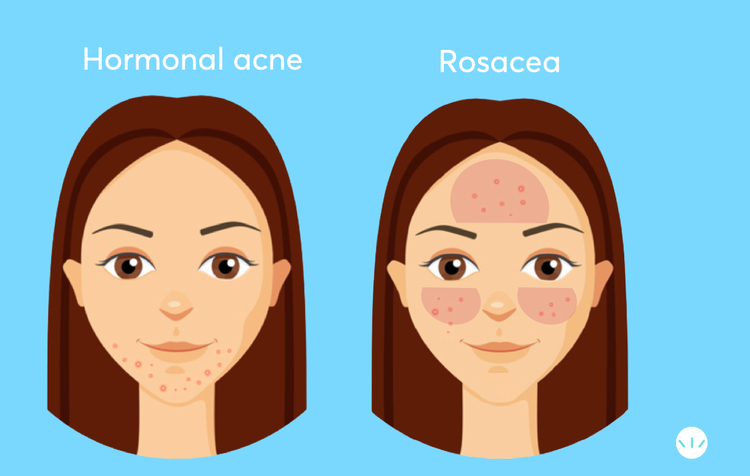 The first signs of rosacea are frequent or constant flushing and redness of the skin. At the beginning of the disease, the flush appears and disappears. Later it becomes permanent with red cheeks, forehead, and chin. Over the years, people with Rosacea may have small red acne-like pimples. Unlike the skin with acne, people with Rosacea do not have comedones (Black and white points), and their pimples usually do not appear on the neck and back or chest. Rosacea affects the eyes in around 50% of people with moderate to severe rosacea. Ocular rosacea can constantly cause red, irritated eyes and red swollen eyelids. (blepharitis).

What are the different types of rosacea?

Here are the main differences between acne and Rosacea: 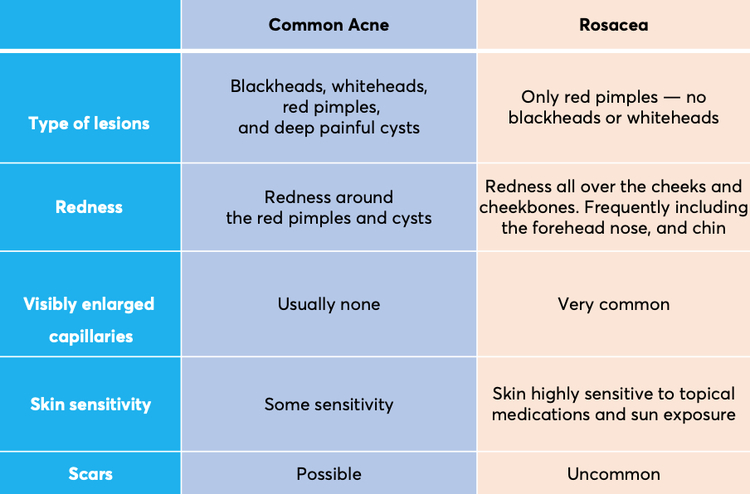 What are the triggers of rosacea?

In a study on 1066 patients with rosacea, it was found that these were the most common causes: 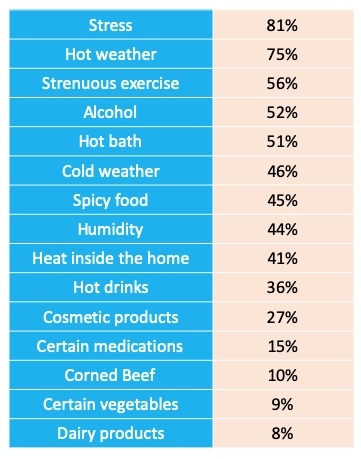 What are the most effective treatments for rosacea?

A good skincare routine is essential for people with Rosacea. The optimal skincare for Rosacea and acne-prone skin will contain a gentle cleanser, a good oil-free active moisturizer, and a night treatment cream.

What are the best cleansers for people with rosacea?

What are the best moisturizers for people with rosacea?

Good skin hydration is essential for people with rosacea-prone skin. People with Rosacea with acne-prone skin should look for non-comedogenic, oil-free moisturizers.

What are the best treatment creams for rosacea?

Benzoyl peroxide, the most effective topical ingredient used in acne, can also help in Rosacea. For optimal results, one should use lower percent BPO (2.5%), applying only tiny amounts of the cream every other night. Unique formulations of benzoyl peroxide contain benzoyl peroxide aloe vera and other anti-inflammatory and antioxidant plant extracts. These additions enhance the efficacy of teh benzoyl peroxide, reducing skin dryness and irritation. In one study, a combination of benzoyl peroxide and a topical antibiotic has shown a reduction of 71% of papules and pustules after e 12 weeks of treatment.

Niacinamide is also very useful for people with rosacea. When applied topically, niacinamide has been shown to have anti-inflammatory effects on the skin and protect the natural skin protective layer. In addition to its anti-inflammatory effects, niacinamide was shown to increase the skin's synthesis of ceramides and collagen. Those effects are believed to help in the treatment of fo acne and Rosacea, improve skin texture, and help reduce skin aging signs. Niacinamide was found to help reduce skin redness and pimples in people with Rosacea. As niacinamide can reduce skin sensitivity, help reduce inflammation, and help fade sun-induced dark spots.

Sulfur is another excellent option for people with Rosacea. In some cases, the rosacea is due to a response to a parasite called Demodex that populates the sebaceous glands. Sulfur and a few prescription treatment gels that contain metronidazole or ivermectin reduce the number of those skin parasites and, by that, reduce the signs and symptoms of rosacea.

Pink clay masks are good over the counter options to calm down teh redness related to Rosacea. Using a pink clay mask, 1-2x per week can be a good addition to the rosacea treatment routine. By absorbing the dead cells and excess sebum from enlarged skin oil glands, these masks can help with rosacea breakouts, reduce skin redness, and improve overall skin texture and brightness.

Lasers or intense pulsed light devices (IPL)can collapse the enlarged blood vessels in the rosaceous skin and reduce skin redness. That said, they do not have any effects on papules and pustules typical to Rosacea.

Which cosmetics ingredients you need to avoid when you have rosacea-prone skin?

People with Rosacea need to avoid cosmetic products and topical medications containing irritating ingredients such as menthol or denatured alcohol. Using alcoholic toners and alcoholic cleansing solutions is not a good idea for these sensitive skin people with Rosacea.

How to prevent rosacea flareups? 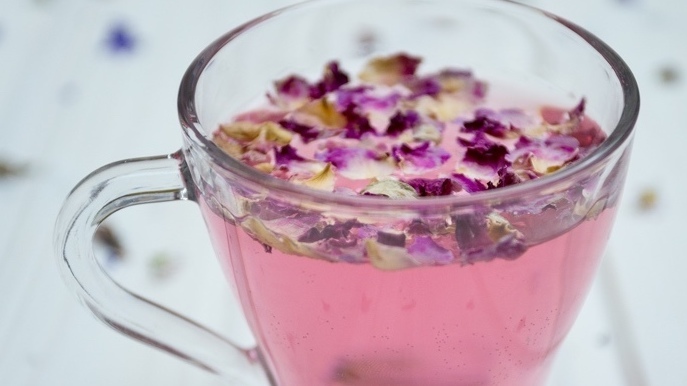 What is the best diet for people with Rosacea?

Having the right diet is essential for people with rosacea-prone skin. In one study by the National Rosacea Society, 95% of people with rosacea that changed improved their diets have seen reported a significant reduction in rosacea breakouts.

In one study, the wine was reported to trigger rosacea flare-ups in 52% of people with rosacea and hard liquor in 42%. Capsaicin, a compound found in hot peppers and many spicy sauces, was used to trigger flare-ups in 75% of people with rosacea-prone skin. Cinnamaldehyde found in tomatoes, citrus, cinnamon, and chocolate is also a possible rosacea trigger. In one study, cinnamaldehyde-containing tomatoes were found to trigger rosacea in (30%), chocolate (23%), and citrus (22%).

What are the 7 worst foods for people with Rosacea?

What are the best supplements for people with Rosacea?